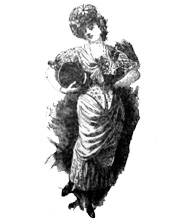 “In sailing o’er life’s ocean wide,
no doubt the heart should be your guide;
but it is awkward when you find
a heart that does not know its mind!”

Ruddigore or The Witch’s Curse

When this operetta opened at the Savoy Theatre on January 22, 1887, it was called Ruddygore.  However, “ruddy” was apparently too close to “bloody” for Victorian tastes, and Gilbert and Sullivan were convinced to use a less offensive spelling.  It was probably a better world that could be offended by such a mild expletive.

The rewrites did not end with the title.  The unfamiliar sound of hisses and boos in the midst of the opening night cheers persuaded Gilbert and Sullivan that their latest work needed extensive revision.  They quickly cut substantial portions of the second act and within days their reworked Ruddigore was on the boards at the Savoy.

Out of such feverish play-doctoring, however, has grown the legend of “Gilbert and Sullivan’s big flop.”  Ruddigore came to be thought of as a lesser effort, a mistake, a lapse in taste, a failure.

We at the Gilbert & Sullivan Very Light Opera Company think this is nonsense, of course.  Ruddigore features some of Sullivan’s best music, and the parody of melodrama concocted by Gilbert sparkles with wit.  By the time the curtain comes down, we think you’ll see why the original production played 288 performances and promoted Gilbert to remark, “I could do with few more such failures.”

“When I’m a bad Bart. I will tell taradiddles!”

“I’ll play a bad part on the falsest of fiddles.”

“But until that takes place I must be conscientious.”

“He’ll be conscientious until that takes place.”

“Then adieu with good grace to my morals sententious!”

—Robin and the Chorus
Ruddigore